Tonight as I was watching the Yankees show power over the Rays, I was enjoying the fact that the Indians were off for the first time in about a month and enjoying the fact that the Indians were coming off a series win vs. the White Sox taking two out of three games due to fast balls thrown right over the heart of the plate leading to back to back homeruns twice in yesterday’s game and 8-4 win. The rookies on the team really shined with home runs from Luis Valbuena and Chris Gimenez followed by homeruns back to back from Victor Martinez and Shin-Soo Choo. What made it extra special was this offensive showcase was against Bartolo Colon, a former Tribe pitcher. These homers along with a defensive gem from Trevor Crowe helped the tribe shine to a series win.

Knowing the Royals are 1-9 in their last 10 games gives me confidence this series will also help our team overcome the odds, and come out on top. If we do then we should be out of the cellar. We shall see as our first adversary will be Brian Bannister. Good luck tomorrow, boys!

The constant drops of rain did not damper the team effort of the Cleveland Indians last night as Ryan Garko, Asdrubal Cabrera, and Kelly Shoppach all had solo shots. In between was added a 2-run homerun by Mark DeRosa. It was nice to hear the roar of the crowd and the BOOM from fireworks four times throughout the night. I was not able to cheer or observe as well as I would like so it was great to be able to rely on such a great crowd, not in terms of size but in terms of great enthusiasm.

Tampa added a solo shot of their own when he hit his 16th homerun as he continued to lead the American League and was only one homerun shy of a tie for the Major League lead in homeruns. For the most part though, Cleveland pitching kept Tampa from getting a rally going as they were held to the 1 run on 6 hits. Evan Longoria, B.J. Upton and Gabe Gross went a combined 0-11 with 1 walk and 2 strikeouts. There were seven strikeouts in all.

It was wonderful to get a win without sweating it out from the bullpen or relying on some comeback to pull us back from the jaws of defeat. I was thinking it might be a long night due to all the rain and delays. However, it turned out to be an awesome night as I was able to get home at a decent hour. Due to the awesome power-led win, the Indians are now 19-28, 9 GB from being average.

Noteworthy news: What is up with Grady? Well, according to Anthony Castrovince, he may end up having to go on the DL. Stay tuned. Called up as insurance is Trevor Crowe. I surely hope Crowe’s production can pick up if Grady does go on the DL. It will really benefit the team to see Crowe excel his way to the top while he spends time up here. Anytime you can get quality production from utility players, your team becomes that much stronger. I want to see us make a run at this division. We can only do this by winning.

I’ll be down at Progressive Field as a fan tonight. I hope to see Zach Jackson help to continue the winning ways as of late for the Tribe. It will boost our efforts if we can win while others are on the shelf for a while. Speaking of one of those DL players, I saw Anthony Reyes last night. He appeared to remain positive from what I could tell even though the possibility of surgery for him is looming. Best of luck to him and all of the Tribe!

I know! I know I’m a whiner! However, I would like to play a game called “what is different between the two pictures?” 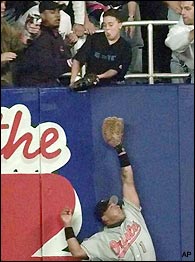 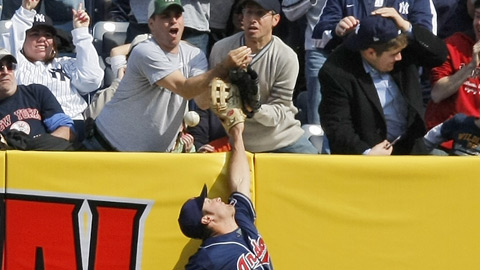 I hate when these types of calls are what decide a team’s fate. Both were in Yankee Stadium, old or new. What is the need for instant replay, if this cannot be reviewed fairly? I saw the fan’s mitt enter into the field of play and interfere with Crowe’s glove today. I often wonder if this was Paul O’Neil in the top picture and Nick Swisher in the picture below if the call would have been called differently.When the umpire decides the momentum, it just gets UGLY! It was not an act of God with the midges. It was an umpire’s choice! To prevent a riot, the umpires did what they felt was the safe call. However, I saw a blownup version of the play and clearly saw  the fan with the black hat and black mitt collide with Crowe. Now this does not excuse what the bullpen did to ruin Pavano’s excellent start. Perez, not able to get people out and Jensen Lewis giving up another homer to right field in relief just is not acceptable. What upset me further was Choo’s giving up on a ball down the left field line that landed fairly. It is games like this that I don’t want to hear cause us to lose out on playoffs in October. I hear often, a team cannot win a division in April, but they sure can lose one.

Ladies and gentlemen, we have to go home and win series, PERIOD! It was nice to earn a split in the Bronx but we had the chance to get 3 out of 4. However sloppy play, controversy and bad decisions led to this loss. Losses happen, yes! This one however needs some explanation which the umpires did not explain. Controversy looms!

I’m going to focus on the farm teams tomorrow and rejoin the Indians at Progressive Field on Tuesday! Thanks for your feedback, readers. Your comments are appreciated and very much welcome.

The temperature felt about 40 degrees, as long as you were standing in the sunshine. Where I was standing in the Kids team shop, it was heated. I was lucky. I was one of the workers at the ballpark helping the fans feel secure.I worked security. I would tell them things like “Thanks for coming to help them win today.” They responded with hesitant hope, saying “We hope so.” I was extremely yet quietly confident. I had to be, it was my job.

I was able to watch the game from television monitors while listening to Tom Hamilton and Mike Hegan call the game. Highlights from what I saw and heard were as follows:

Grady gets on base, we score.

Grady was able to get on base. His aggresive style of base running allowed him to score the team’s first run and give us the lead to keep. He also was on base when Mark DeRosa hit a two-run homerun to left field. I love how I heard Tom’s voice echoing as I was working saying “A swing and a drive..way back…gone…” as he does almost everytime.

Another highlight for me was seeing Shin Soo-Choo hit a double down the first base side in his second at-bat. The reason was I selected him for yesterday in the MLB.com Beat the Streak Contest. I go up and down in that contest. Yesterday I was blessed to have such luck.

I thought it was wonderful to see with the game 3-1 and two men on that Trevor Crowe came through with his first hit. The reason was not only to see it in person but what Tom said prior to it. He said that someone very soon was going to get burned by Trevor. Sure enough, on the next pitch, Trevor hit a double scoring two, making the score 5-1.

The next inning became shaky. The Blue Jays cut the score to 5-4. I thought that Jensen came through in a big way striking out Marco Scutaro and getting another to ground out with runners on base.

The return of Pronk continued as he smashed one deep into the seats. It was a no-doubter of Brandon “Major” League whom I always say looks like Rick Vaughn with those glasses.

Welcome to the Jungle! Here came Kerry Wood, an intimidation factor who does not back down. He is someone we haven’t seen in a long time. No one gets on. Striking out the side, WOW! We’re used to biting our nails, sweating and grinding it out for a save or win.

I am pumped! The day is almost finally here. We have our bags packed and are ready to move out of the Cleveland area in the morning. We are scheduled to land in Phoenix, AZ right before the first pitch at Goodyear Stadium against the San Francisco Giants.

I expect the atmosphere will be electric as Jeremy Sowers will kick off a competition for the fifth spot in the rotation for the Indians. As much as Major League Baseball fans wanted this, the matchup of Cy Youngs for 2008 is not going to take place. However, Tim Lincecum is scheduled to see some action tomorrow against Cleveland.

Barfield and Crowe seize the opportunity to shine in 2009 as both are fighting for roster spots on the Major League Roster. Barfield’s highlights included a three run homerun and a 5-4-3 double play started by him at third base to end the second inning. Crowe also had a homer, a single and scored twice. These two really made a mark in carrying their team to victory 8-6.