The joy of Spring gives people a sign of life, new beginning, a chance to start over, become better. It is this wish I hope for Miguel Cabrera, Austin Kearns and Coco Crisp. In my previous blog, I gave sincere praise to Mr. Crisp. It was shortly after I posted the entry that Mr. Crisp was the third player caught with a DUI. I just hope that these three gentlemen and others find what Spring is supposed to be about beyond the game of baseball off the field as well as on it. It is easy for me to preach because I don’t drink but I do have my addictions that are known to God alone. I fight them every day once I address them and can only address them with God’s help. Hopefully, these ballplayers can address their problems with God, family and friends to guide them also. 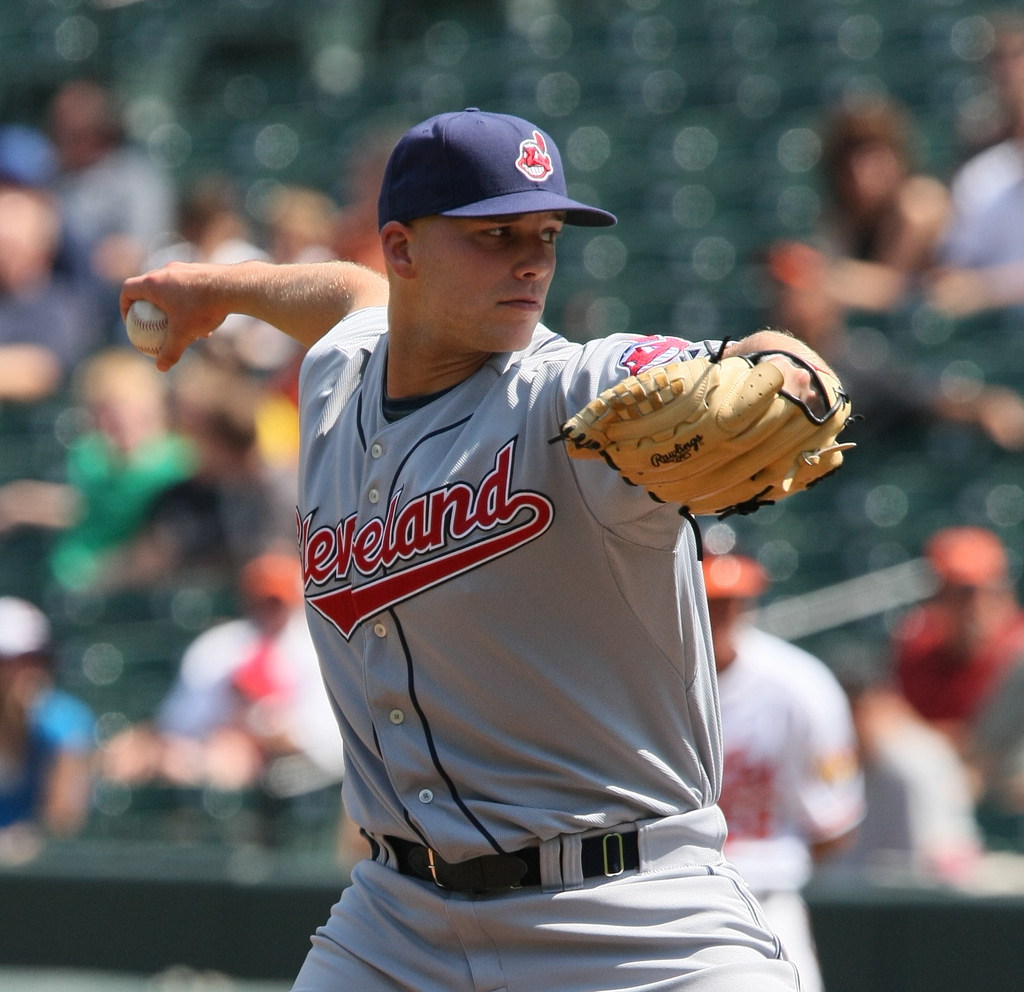 Also in my previous blog, I addressed the pitching and how wonderful it was so far to see pitchers go out there and put their work in rather successfully. Yesterday’s game was different. Masterson was not masterful as he he gave up 2 runs and 2 hits in 2 innings pitched. What troubled me more than this was the amount of walks that he had: 3 of them.
Jordan Bastian, the MLB.com beat reporter for the Tribe mentioned after the game on Twitter that Justin Masterson loved bowling. I responded back to him without a response that Masterson was now throwing more strikes in bowling than in baseball at this time. Well, yesterday’s performance showed it anyway.

On a positive note for the Tribe, the combination of Drew Pomerantz, Joe Smith and Vinnie Pestano pitched the following line 3 innings pitched 1 walk allowed and 5 strikeouts with no runs allowed. This is what I call relief. I really hope this attack of the strike zone can continue. Way to go so far!

Movement off the field of play saw one of my favorite players traded away to Seattle yesterday in Aaron Laffey. Hopefully he will find an opportunity to compete for a starting role with former Indians manager Eric Wedge and former pitching coach Carl Willis reunited with Aaron. I really wish Aaron well and enjoyed meeting him briefly at Progressive Field. I really think he has potential. I just hope he does not do well against us, of course.>

In return, the Indians received Matt Lawson. Two things I thought about, when first reading the news on Twitter, was Matt Lawton and the former local food mart, Lawson’s which was bought out some time ago. However, Matt Lawson is not related to either thought.
In case, one wants to know more, Matt Lawson was one of the prospects who was received by Seattle when they traded Cliff Lee to Texas. His history has him playing 2nd base or shortstop but not at third. Hopefully, he will continue to blossom in the Indians’ farm system.

Later today, the Indians take their squad to face a split-squad Ranger squad in Surprise. I remember in their debut year in Goodyear seeing the Royals there against the Tribe. It is a beautiful park. Hopefully there will be little to no surprises for the Tribe to face when playing Texas. Neftali Feliz is scheduled to get some work against Cleveland as well as Derek Holland a AAA pitcher battling for a spot in the rotation for the defending American League champions. For the Tribe, the Rangers game will be a litmus test and hopefully will be fun to see how we match up with them. 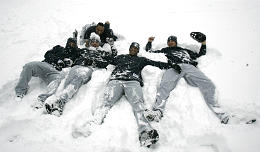 I was traveling in tonight’s return to February in Cleveland at a time when everything representing new life, springtime, Easter, Opening Day was coming up this weekend with the return of Opening Day. Instead I received an image I remember from 2007. Seattle came to town. I was one of many volunteers asked to carry the U.S flag and unfurl it on the field. Before the ceremonies last year, there was a huge snowstorm on the field. I was asked to volunteer which I gladly did. I took and strapped on a leaf blower and helped assist the grounds crew to clear off the snow on the field for Opening Day so the game and all the festivities could be performed.

Tonight down around Progressive Field, the snow and wind and cold all were factors again as in 2007 as it was bitter. I was walking around the outside of the ballpark and thought to myself how mentally tough any of the Indians would have to be to play in this weather. I think the same thing applies for the Indians today in Texas. We are going to have to expect that the hitters that Texas has are relentless and we are going to have to be that much tougher mentally to compete, to overcome their offensive prowess and win the game.

Two key people that will have to show this mental toughness are Fausto Carmona whose mental toughness was at its best in the infamous “bug” game in the 2007 ALDS and Travis Hafner, whose mental makeup was tested as he came through with the game winning hit that day. If we get a similar result tomorrow from both, we will prevail. Hopefully he can lead the offense while Carmona can pitch without distractions. If both results can take place, and the bullpen can acheive as advertised, then a win is likely. Still the key word at this moment is “If.” 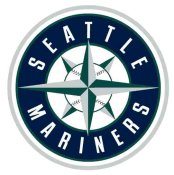 The Mariners have a new attitude infused into the management side of things with the debut of Manager Don Wakamatsu. General Manager Jack Zduriencik continued to make moves by dealing J.J. Putz as part of a trade with the Indians and Mets for players like Franklin Gutierrez while also trying to recapture some memories of the glory days with the re-signing of Ken Griffey Jr..They are searching for a closer and will probably have a few closers. With all this indecision and instability, fourth place will still be the result. Still, there will be improvement and excitement returning to the northwestern U.S. soon. At least that is the hope.

The Athletics are like a ticking time bomb. If the young pitching and the new hitters on this team like Jason Giambi and Matt Holliday click together, this will be an interesting team to watch to see if they can contend. They have excellent pitching prospects and a solid bullpen. The question is if they can explode fast into contention or have to trade away Holliday or Giambi by July to rebuild. I think the latter. Third place will be a result.

The Rangers will be a scoring machine. The key to the Rangers success will be the pitching. With Mike Maddux as their new pitching coach and Nolan Ryan as their team president and the best minor league system, they should improve, yet will it good enough to contend for the division. I think their starters are not good enough to do this. I may be wrong but I think third place will be the result because the starters and relievers just do not strike me as star calibur players ready to help this team compete with the Angels. They are close, just not close enough. Second place will be the result.

The Angels lost key free agents in Texieria and K-Rod and replaced K-Rod with Brian Fuentes. I think they may have enough to repeat as division champs. However, it will be a tighter division for them. I think the risk taking in fundamental baseball that Scoscia has makes them a contender and they are deep enough to have spot starters to fill in to start the season. I pick them to be first but I’m nervous about it. it will all be about carrying momentum for them and getting off to a fast start if they want to truly win, otherwise it may be a dogfight to the finish.

Cleveland Ohio: I’m feeling great today, enough to give you this preview and postgame of today’s game between the Cleveland Indians and the Seattle Mariners.

The Cleveland Indians are 6-10 and the Seattle Mariners are 7-8 respectively this Spring.

Thoughts that came to my mind concerning this game and the Mariners two games were:

1. I noticed that Russell Branyan was not headed to Goodyear Field and it got me to thinking what are they so afraid of. Do they think we know too much about him being a former Indian and his weaknesses?

2. I also was reading about the Seattle Mariners and realized that Erik Bedard was pitching one inning against the Dodgers today and not against us, the Tribe. I was wondering why this is the case. I thought perhaps, it was because they don’t want us to get a good read on him for the regular season when we might face him again.

3. I also saw Ken Griffey was not here for us to scout today. Yes it has been several years but do the Mariners think we may rescout his weaknesses and discover something more to exploit during the regular season, perhaps. Also, Franklin Gutierrez will not be here. Hmmm…

4. I also noticed Grady Sizemore, a native from Washington was also not in today’s lineup. I wonder if Seattle has an excellent read on Sizemore and we want to leave him out to keep the Mariners from getting even a better read on Sizemore for 2009.

Remember, these are just things that make me go hmmm. The press will say one thing but just what are the reason for what is going on between these two teams as they strategize for later when the games really count in 2009. Nevertheless, enjoy the game today and the best of luck to Jeremy Sowers. Talk to all of you after the game, hopefully! Until then, let’s get ready to play ball!

*Please also note and be patient for I am going to be doing some Spring cleaning of my blog tonight. It will be put back up. I am just rearranging some items on the blog page. Thanks!*

Postgame-I read the box score courtesy of www.mlb.com and was overjoyed like I haven’t been in a long time. So many times I put so much focus into the pressure of the “now” and take it personally. I think I was like that with football years ago. Win-its a great week, lose its a bad week, then I learned to let go and just have fun. Tonight I did this. I did not hang on to every pitch, I just let go and was so excited to see that Chris Gimenez came through with a game-winning homerun. What a moment! It seems a lesson is here! I let go of the “now”, relaxed and let the players just play without worrying about them for a change, took time for myself and a movie that really was great. Lo, and behold, the Indians now are 7-10, thanks to God and Chris Gimenez! What a day into night that it has been for me! Hopefully the Tribe can do this again. Final score Cleveland 4 Seattle 1