On a date marked the 1st of the month, the Cleveland Indians came into May with 18 wins, a franchise record for the month of April. What would May bring? Another victory, yes! Now they have 19!

Before the beginning of the 2011 season, #11 Manny Acta was joking but also somewhat serious when he contemplated how the Cleveland Indians were going to win 100 games. On day 1, #19 was honored and it was announced that a patch for Bob Feller was going to be worn on their sleeve.

Also the team promotes all the wonderful events of its 110 year history by saying “what if?” Things are happening for a reason and I say this by faith. The Indians organization led by #11 in 2011 have won 19 and are inspired by #19 on the day marked 01 on the calendar. The organization was established in 1901.

On this date, if Bob Feller was still alive on Earth, having served in World War 2, he would approve of the news that Osama Bin Laden was dead. This was announced to the crowd in Philadelphia in the 9th inning with the score tied 1-1.(9-11) Eventually the Mets would win. This allowed the Cleveland Indians to have the best record in Major League Baseball for at least the one day. What a blessing! Thank God! USA! USA!

It has been a wonderful moment for the USA, for New York and Cleveland also and for the world! Whatever happens from here, God only knows. However, we Cleveland Indians fans can be happy that for the moment we are #1 led by the memory of #19 and the wisdom of #11 and the memories of 1901, 2001 and May 1, 2011.

On a side note, I think it is also special that the offense has been helped so far by the reemergence of  Travis Hafner #48 and the pitching has been helped by #54 Chris Perez. 1948 and 1954 are special years in Cleveland Indians history as you know. I just think it has been a very special year so far. Let’s see what happens next!

The Cleveland Indians are playing like it is Christmas in April. They gave their fans a Royals sweep. As a franchise, Manny Acta is getting the team to rise up to the challenges daily. It is really exciting.

I tweeted the following to Manny Acta on Tuesday. The team responded positively.

@MacTriber_11 hey tell the team, there is a “Royal Wedding” this Friday. Anyone royal doesn’t need anything else to celebrate this week.

It is my hope that this celebration can continue. Fireworks are tonight and the debut of Alex White happens tomorrow. There is a true buzz around Progressive Field these days. The pitching continues to amaze with quality starts and the offense and defense are all clicking very well. This Week In Baseball will highlight the Cleveland Indians debuting tomorrow.

If one saw the Royal Wedding this morning, the crowd there too was buzzing and very happy. It is my hope that this type of crowd will be join me tonight down at Progressive Field. This team is truly exciting and worth spending money on to watch.

I saw my first Spring Training game here, my first baseball game ever, Phoenix AZ. It was also the place I saw my first basketball game. So for me, hearing about the Cleveland Indians and the Oakland Athletics playing here today brings back memories then and now. This year it will bring back memories of the first person I introduced my kids to. 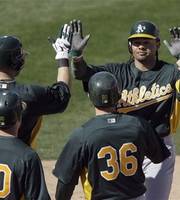 I have always tried to teach my kids to love the game of baseball too like I was taught to love it. The person I said for them to memorize was Coco Crisp. I was thinking “Cocoa Krispies”, “hot chocolate”, this will get my kids to like the game. I think highly of Coco Crisp, more than other Indians, Red Sox, Royals or A’s fans ever did or will. For me, Coco is a person to look up to, a role model. I told my kids, see that Coco run, see that Coco hit, see that Coco hit. Now you cheer for him, he is great. It was not Dick and Jane but it got the pint across. Coco=love of baseball to my 3 and 2 year old then. For me, he was the Indians youth movement then. The interesting thing was when I asked my kids who their favorite players were, Coco Crisp was not their answer, as I tried to spoon feed them this answer. They said “Casey Blake” “Travis Hafner” So much for Coco. Still they love the sport today and it is wonderful to see. Thanks Coco for the inspiration.

Yesterday the Indians were inspired to leave their Goodyear Indian fans with a 2-1 win against the Dodgers. I received updates on MLB.com on breaks at work as they were playing as I was working. Here is what I took away from the box score.

The pitching is doing well. When one sees two hits spread among 5 pitchers this is awesome. Yes I know it does not spell anything in Spring Training except this: consistency in the staff, attacking the strike zone 9 total strikeouts among the staff. Pitches to strikes was an interesting stat. For example, Huff who had 3 strikouts in his two innings of work did not throw 1 ball. The stats showed the Dodgers had 8 walks and the Indians gave up 1 walk. That to me tells more than the score about what the Indians are trying to do in these games:attack the strike zone. Isnt this what Acta preached at the beginning? Keep it up Tribe!

As a Cleveland fan, its’ easy to get down…way down before beginning. Seeing the record of the 2010 Indians at 69-93, the Cavaliers currently with 11 wins with a new coach after the All-Star Break, the Browns with another losing season and a new coach, one can say where is the hope? For the Indians, its a true test of faith and see why its a great time to love the 2011 Cleveland Indians baseball club. This is exactly what Manuel Acta is doing.

Focus on the second half…see how great the team did…build on this is what Acta is preaching. The fan wants all these players to gel and everything to click NOW! Yet, Acta and the rest of the coaching staff, while wanting the team to progress is not pressing. This is Spring Training. Grady is making slow progress. Shin-Soo Choo while hitting for power has slight elbow soreness and will sit out today. This is good. This teaches me a lot as a fan. Be patient! Let them be healthy!

It will be hard to not see Feller out there physically. However, he will be there. I believe this. There will be a video tribute for Feller, a patch worn by the team, and a banner with the words USS Alabama will help begin honoring Mr. Feller. What a wonderful tribute!

There will be battles for the fifth starter, and third base. However, the depth which must develop to make us stronger will be interesting. In baseball, the best thing for this young team is experience. These games will help this team take another step. We as fans must be patient and not be bandwagon fans if we truly wish to see this team be a champion. This is the challenge. Goal: Have a stronger, deeper farm, bench and team!

To review fans (note to self)…be patient….be healthy….be ready….cheer on no matter what! Do not compare this team to others. Accept them for who they are! Hopefully, they compete and win
Good luck Tribe! Train well! Please try to beat the Reds<–ego push "Battle of Ohio"

Well, for 2010 when the money belts are tight and the offers have been very light, the Indians have tried to fool us into believing a trip by Russell “Marty McFly” Branyan as a possibility end up benefitting the Tribe for 2010. I beg to differ.

In each of the years that Branyan played for the Tribe, he had more strikeouts than hits while playing for the Tribe. Now, he had his best year in the majors last year. Still, I can’t help but think about Rob Deer when I think about Russ Branyan.

Who is Rob Deer? Well he played for the Milwaukee Brewers and seemed to hold a memory of hitting a homerun or striking out. Sometimes he led the AL in strikeouts. Oh what a mess. Well, when I see Russ, I think of the same type of player. 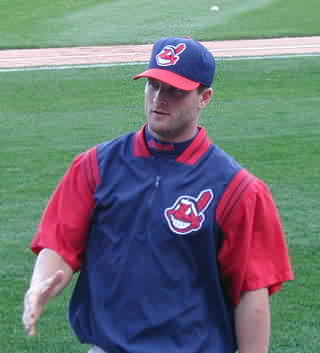 Now think of this scenario. Runners in scoring position and Acta has the team fighting for a win and Russ steps up as the winning run. What will he most likely do? Well if history repeats itself, lots of K’s and lots of L’s will make 2010 a big M-E-S-S with a coach that never showed a great performance while in Washington. What a potentially bad opening act!

Russ will make our team worse, not better!